Making Their Next Leap

Lowell – As Kevin Lynch surveys the inflatable trampoline-basketball court, a small pack of kids scampers underfoot and starts to clamber in.

“Two at a time, guys, OK?” Lynch calls out genially. The game is a big hit, as are the 22-foot-tall inflatable slide and the brightly colored inflatable obstacle course. In fact, Lynch’s business on Phoenix Avenue, called Jump On In, has become so popular since it opened in January 2005 that he and his wife, Carla, have decided to turn it into a franchise.

“I’d like to establish a foothold in the New England market, become a well-known name,” Lynch said. “I’ve never looked at it as a one-facility type of business.”

Jump On In has already secured its first franchisee, Adrian Manning of Middleton, who opened a location in Haverhill last weekend. Manning concurs with Lynch’s assessment that the niche “private party place” market is underserved in the area. He first heard of Jump On In when he was searching for a facility for a birthday party for his young children. Manning was impressed with the business, but decided it was too far for guests to travel.

A year later, he and his wife, Delba, were opening their own franchise. (Between 600 and 800 people showed up for last weekend’s grand opening, according to Lynch and Manning.) The startup costs were about $300,000, Manning said, roughly what Lynch paid to start the Lowell location. Jump On In is charging an initial fee of $27,500 to franchisees, and will also collect 5 percent of gross revenue. In exchange, investors get a “turnkey” operation — Lynch has drawn up a roughly 1,000-page instruction manual — and assistance with site selection, marketing and information technology.

At least four more Jump On In locations are already in the works, Lynch said. One franchisee in Nashua already has a location approved by the Planning Board near Bishop Guertin High School. Another investor has signed up for a franchise in Woburn, and Lynch’s brother-in-law is scouting out locations in New York and New Jersey.

Lynch said he first wants to expand within the Northeast, but he’s not ruling out going national.

“It’s a great concept, and there really seems to be a need in the market for it,” he said.

According to the International Franchise Association, a California company called Pump It Up currently dominates the industry with 110 locations, mostly in the West. The only other franchisor in the market on the IFA’s rolls is BounceU of Mesa, Ariz., with 12 locations.

Locally, Jump On In gained a competitor just this month when a similar operation, The Backyard Party Place, opened in Dracut. Lynch said he thinks both businesses can do well in the market.

Jump On In’s business model is simple: The 10,000-square-foot space can accommodate two small groups or one large group at a time in its two gyms and two party rooms. Up to 25 children are allowed in each gym. The business is generally open Wednesday through Sunday, whenever school is not in session.

Lynch said he wants customers to associate four qualities with Jump On In: fun, clean, active and easy (meaning safe for kids and stress-free for parents).

“It’s a nice, private place for a party that’s not a madhouse,” Lynch summed up.

Lynch, 48, expects the franchising to take up more and more of his time. He’s putting his background in finance — he has an MBA and previously worked for a private investment firm — to good use. Manning also came to the inflatable-party industry from finance, having worked as global client services director at Standard & Poors.

Lynch admitted to being somewhat anxious when he opened Jump On In. “We really took a risk, but it opened with a bang and it’s kept going,” he said.

At Jump On In last week, a group from the YMCA was taking up both gyms. The place filled up with the familiar happy squeals and screams of kids having fun. It remains to be seen whether Lynch’s investors, after forking over hundreds of thousands of dollars for Jump On In franchises, will end up displaying the same kind of enthusiasm. 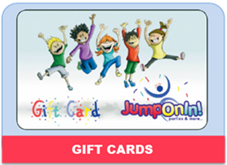 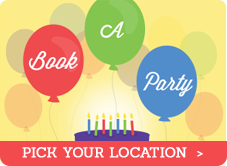